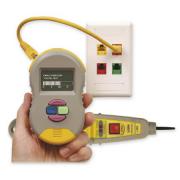 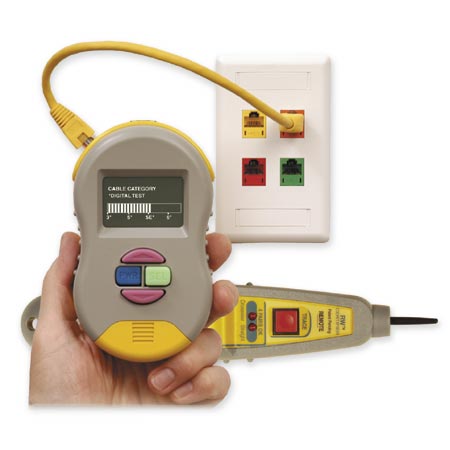 The Real World Certifier has many of the features of the far more expensive certifiers, so what is the difference?

ANSWER: A "Certifier" is typically a two piece test set that is installed at the near end and the far end of a cable. The unit at the far end transmits high speed ANALOG sine waves across a broad spectrum that are analyzed by the unit on the near end. Many tests are performed and the results of each test are normally reported as "Pass/Fail" with time and dB measurements included. As a final result the cable is "Certified" as a Cat 3, Cat 5, Cat 5e or 6. This capability depends on the particular certifier (i.e. many certifiers are not yet able to test to Cat 6).

A Real World Certifier uses digital testing techniques to arrive at CABLE TYPE (Cat 3, 5, 5E, 6)  and the speed capability if the cable (10MB, 100MB, 1000MB). Further, the Real World Certifier breaks its testing into two levels termed "Level 1" and "Level 2". The Level 1 test uses the Real World Certifier Main Unit on the near end and transmits SIMULATED DIGITAL DATA to the Remote Probe Unit on the far end. Many tests are performed and the results of most tests are reported as "Pass/Fail". Other tests provide timing measurements and Cable Typing (Cat 3, 5, 5E, 6). The final result is a "Projected Speed" graph of the cable (10MB, 100MB, 1000 MB). The Level 2 test is similar to the Level 1 except the device on the far end is a hub, switch or PC.

The LAN device at the far end transmits REAL DIGITAL DATA that is analyzed by the Real World Certifier at the near end. If the far end unit is a Gigabit switch or other 1000 MB device, the cable is tested for speed capabilities with real data up to a Gigabit (1000 MB). As you might suspect, Level 2 tests cans only test up to the speed capability of the device providing the data. For instance, if the far end unit is a 100MB device, then the Level 2 speed testing is limited to 100MB. Byte Brothers offers a small, lightweight Cisco/Linksys Gigabit switch for $125 for those who wish to test to a Gigabit and do not have their own LAN device to drive the cable. The results are reported as "Pass/Fail" with certain tests having time measurements included. The final result  is a "Confirmed Speed" graph rating the cable for its data capacity (up to 1 Gigabit if a Gigabit hub switch or PC is used on the far end). 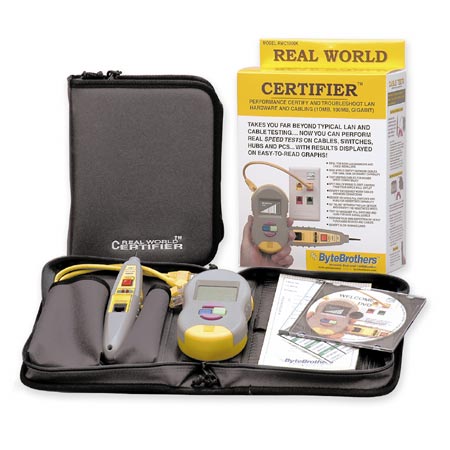 QUESTION: Level 1 vs. Level 2.
What is the difference between Real World Certification Level 1 and Level 2?

ANSWER: Real World Level 1 certification features opens, shorts and split pairs testing (including distance to the fault) along with propagation delay, skew, NEXT and NEXT (FAR), and Cable Typing measurements. Level 1 testing uses simulated digital signals to test the cable. Use Level 1 for new cable installations or anytime a LAN device (hub, switch, PC) is not available.

ANSWER: Yes. The Real World Certifier performs all of the same tests of a high quality cable tester... and then goes far beyond. For instance, you will find all of the standard cable verification tests like LENGTH (with a real one-nanosecond TDR), OPENS, SHORTS; WIRE MAP, and SPLIT PAIRS (including distance to the split!). These might be all you need at this point. But when you are ready, the Real World Certifier also performs crosstalk testing (NEXT and NEXT FAR), PROPAGATION DELAY (time for the signal to transit the cable), SKEW (time delay netween pairs), Cable Typing (Cat 3, 5, 5E, 6) and ATTENUATION.... along with the speed testing.

ANSWER: "Port scanning" involves connecting the Real World Certifier to single LAN device and performing the Port Scan test. The test deciphers the link pulse from the LAN device and displays the "advertised" capabilities of the device (speed, duplex, auto configuration, etc.). There is no guarantee that when you connect this LAN device to another that it will operate at its highest advertised speed. It all depends on the compatibility of the two LAN devices.

With "Inline port scanning" you connect the Real World Certifier to both LAN devices and perform the Port Scan test. The test deciphers the speed and duplex that was "negotiated" by the two LAN devices. This tells you the actual operating speed of the link. For instance, a switch with an "advertised" capability of 1 Gigabit (1000 MB), full duplex connected to a PC with an "advertised" speed of 100 MB, full duplex should negotiate to the highest compatible speed and duplex (in this case 100 MB, full duplex). The Real World Certifier's inline capability will verify if this is true.

QUESTION: Printer vs documentation tablet.
Does the RWC1000 have a printer attachment?

ANSWER: Documenting results is important and printers are perfect for the job but they are bulky and expensive. Byte Brothers offers a "Documentation tablet" that follows the Real World Certification process precisely. The person performing the test can check off the progress of the test, document the location of the cable and affix a "PASSED" sticker to the cable outlet or device. A tablet and PASSED stickers are included with the RWC1000.

Take me back to the RWC product page.

BUILD YOUR OWN TOOL KIT

Get exactly what you need with a custom tool kit from Tecra Tools.

Get tips & information for field service and MRO professionals.